Last week, Paramount Recruitment’s Eugene McDaid went stateside to attend the Boston Festival of Genomics. Here, he shares his thoughts and findings about the US biotech and pharma industries, the challenges they are facing and how the genomics scene in Boston compares to the UK:

My recent visit to Boston’s Festival of Genomics was both an interesting and inspiring one, allowing me to fully immerse myself in the region’s biotech industry for a few days to take in its successes and better understand the challenges that are unique to the US and its culture.

The first thing I noticed was how much investment there is for US biotech companies, particularly in Boston. Even start-up companies have considerable resources and there is an unwavering belief that they can and will make things happen. In the country that counts Google, Microsoft, Apple and Facebook among its successful start-ups, perhaps those big dreams are aren’t so far-fetched.

From chatting to a few of the local biotech companies, this additional resource equates to very competitive salaries for skilled science jobs in the States but in a rapidly growing industry, it will be quantity the sector needs to continue on its current trajectory. 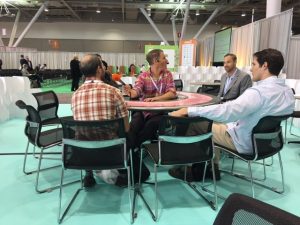 I attended lots of the Festival’s talks and conferences to get a feel for the industry, the people working in it and the issues they faced. One thing that came across very clearly was the need for greater collaboration within the genomics community. While hospitals and academic researchers work closely together on studies, this research is not shared with neighbouring cohorts who may be working in similar fields. By pooling data, breakthroughs will almost certainly come quicker. In the UK, this kind of silo working is not as prolific because the NHS sits above every Trust and has an overarching view of activity including research.

One of my favourite talks at the Festival was from Matt Nelson, head of Genetics at GSK. He compared drug discovery to space travel and proved that it is cheaper to fly to space than launch a new drug! It costs $125m to get a rocket into space, it takes $2.6bn to bring a new drug to market (and around 15 years).

To bring this cost and time investment down, GSK is increasingly relying on genetic evidence to support its approvals. This approach makes the drug twice as likely to be approved and can knock 5 years off the time to market and $450m off the cost. In the future, more and more pharma companies will undoubtedly adopt this approach so we could see a shift towards using genetic evidence at the start of the drug discovery process, rather than retrospectively, to quicken the process of bringing new drugs to market. 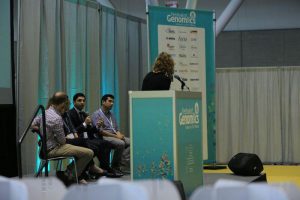 Later on, I listened to a speech from a mother – Heather Norwood – whose son was diagnosed with a rare genetic mutation (FoxG1). The only way this condition can be properly identified is through genetic testing, and in some cases, whole genome sequencing. The discovery of FoxG1 is so recent that most doctors are unaware of it, therefore correct diagnosis is difficult and there are no treatments currently available beyond those that alleviate related symptoms, like seizures.

For me, this raised a particularly pertinent question about how genomics could be integrated into the US health system. Could the ultimate goal of precision medicine be held back by America’s insurance-based system? Will insurers pay for expensive genetic testing to properly identify conditions? If they were willing to cough up for routine genome mapping, would this information be available to insurers? Surely this would inevitably lead to higher premiums for those with a predisposal to a genetic condition, regardless of whether or not they actually develop symptoms. American patients will certainly want some reassurances before they allow their genetic information to be mapped and/or shared.

While we are still some way away from mainstream tailored medicine for all, the US genomics industry is already asking the important questions and looking to build the bridges before the need to cross them. For example, the need for better education to ensure the general population understands genomics based medicine and health choices, and the issues surrounding data storage.

In the US, The Broad Institute has created the FireCloud, a secure cloud-based solution for biotechs to store and share large amounts (we are talking petabytes!) of cancer genomics data. The UK biotech industry will be keen to see how the FireCloud performs, as it may be a possible solution to sharing large volumes of data here – particularly for Genomics England who will have considerable amounts of information once the 100,000 genomes project is completed.

Before I went to Boston, I was interested to find out more about their talent pool and whether there is a shortage of people to meet the needs of the industry. The general consensus was that wheels needed to go into motion now to ensure the future of the US’s biotech industry; this would mean putting genomics on the syllabus for junior and senior schools and updating their biology curriculum with more relevant techniques and information. There also needs to be work around combining science and computer studies (as they do in the real world) and also promoting biotech jobs as a career choice.

Like the UK, the progress of future discoveries in the US will depend on getting good people into the industry, so there is very much a feeling that this needs to be tackled now to avoid future shortages.

I thoroughly enjoyed my trip to Boston, being around such positive and ambitious companies who are driven to make a difference. Our American cousins are not that different to the UK genomics community, but I feel that while the US may be better resourced and commercially minded, the UK still has the greatest opportunity to be a world leader in precision medicine thanks to our NHS infrastructure and our willingness to co-operate.

Continuing my Festival of Genomics tour a little closer to home, Paramount Recruitment will be at the London festival from 30-31 January 2018. We look forward to seeing you then! Have a nice day!