The average salary for a male worker in the UK Genomics sector is 18% higher than the average female salary. This gender pay gap was one of the most striking findings from the Genomics Industry Workforce survey report published last week by Front Line Genomics and Paramount Recruitment. 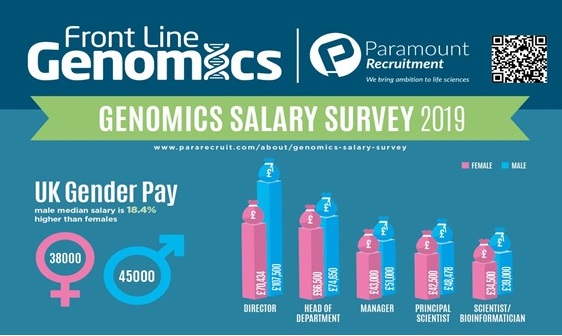 The Workforce insights survey compiled responses from 1,283 professionals currently working in the Genomics industry in 62 countries worldwide.   The key highlights of the survey were provided to all attendees at the London Festival of Genomics last month.

The largest difference between male and female pay is for Directors (males earn 52.6% more than females) and for Managers (males earn 18.6% more).  This gap is actually less than last year (where the gaps were Directors 56% and Managers 30%).  For all roles and all functions, the median male salary is higher than the median female salary.

“We are encouraged that the pay gap is less than last year’s survey but it is still very disappointing to see such a high gender pay disparity at managerial levels. It is however positive to see that 53% of the UK survey responders were female and 46% male, which is a much healthier gender balance than in many STEM areas within UK industry.”

The full report of the survey provides some fascinating details including the gender pay gap in the UK, average salaries earned within each function/role, the average pay rise anticipated this year and the future demand for each key skill area within genomics.

The report is available for free upon request through the Genomics Salary Survey page on this website.